Here’s a story we first found when we came across a piece in The Times called “Hans Christian Andersen’s visit was no fairytale for Dickens.”  It so intrigued us that we looked into it and wanted to share this little gem of a tale.

Clearly, not all children’s authors get along. Sometimes they just sort of butt heads without meaning to. These aren’t necessarily feuds (though we originally dedicated an entire chapter to that little area), but rather brief moments of significant conflict. Now generally speaking, authors and illustrators for kids don’t feud. They don’t go slapping one another with white gloves over the fair hands of the best editors. That said, tempers rise. Problems come up. There is no helping it. It happens.

L. Frank Baum, the author of The Wonderful Wizard of Oz, once said of the fairy tale king Hans Christian Andersen that he “had not only a marvelous imagination but he was a poet as well, and surrounded his tales with some of the most beautiful descriptive passages known to our literature. As children you skipped those passages – I can guess that, because as a child I skipped them myself.” 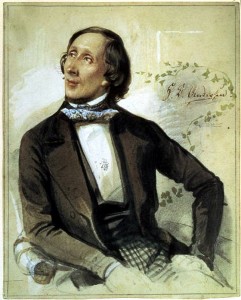 Hans Christian Andersen is remembered as the father of the fairy tale. It would be difficult to decide which story of his is the best known. The Emperor’s New Clothes or The Ugly Duckling? Thumbelina or The Little Mermaid? When we think of the man we may conjure up Danny Kaye singing an exultant “I’m Hans Christian Andersen” from the bio pic. The real Andersen, however, was hardly the blond, handsome, let’s-sing-about-inchworms chap Kaye portrays. He could be a difficult man to get along with. He was called egotistical, anxious, and sometimes just the most irritable little cuss you ever met. On top of that was his perception of his own self. In his own autobiography, The Fairy Tale of My Life, he is quoted as saying of becoming a writer, ”First, you undergo such a terrible amount of suffering, and then you become famous.” In one example of said suffering, Andersen fell desperately in love with Jenny Lind, the singing sensation known worldwide as The Swedish Nightingale. He wrote several fairy tales for her, including The Ugly Duckling (when she mentioned she had a “potato nose”), The Nightingale (for obvious reasons), and The Snow Queen (after an incident when she was cold to him). That said, he didn’t make much headway with the woman. When she wouldn’t love him, he asked why. Her response? She handed the poor sap a mirror. Ouch!

Looks and poor self-esteem aside, he was beloved. And amongst his admirers was none other than one Mr. Charles Dickens. Charles was a big time fan of Andersen’s fairy tales and even went so far as to invite him to stay with him for a little while in his home. 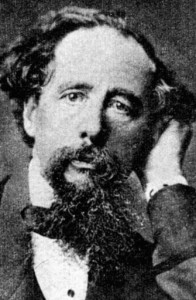 Anderson liked Dickens too. In fact, he called him “the greatest writer of our time.” They struck up a correspondence, and in the summer of 1857 Andersen agreed to stay with Dickens, saying at the time, “I reckon that you will have me with you a week or a fortnight, and that I shall not inconvenience you too much.” Famous last words. The man stayed for FIVE WEEKS.

Five weeks is a long time for even the most charming of guests, but Andersen had a habit of riling his hosts. While he stayed with the family, he was seen as a bit of an oddity. Dickens’ second daughter Kate called the man a “bony bore” and said that one morning “Mrs. Dickens found him prostrated face downwards upon the lawn in tears and clutching a newspaper received that day from Denmark, which contained an adverse criticism regarding his latest book.” Dickens dropped hints that perhaps Mr. Andersen might want to return to his own home, but little came of it. Andersen wasn’t one for hints.

Once he finally did take off, Andersen wrote in his autobiography that “My visit to Dickens was and will remain a highlight of in my life . . . that visit so precious to me, when the man Dickens became as infinitely dear to me as was and is the writer Dickens.” In a letter to Dickens later, he would reiterate once more that the visit was “a highlight in my life.”

For his own part, Dickens wrote the following message on a card stuck up over the dressing-table mirror in the guest room; “Hans Andersen slept in this room for five weeks — which seemed to the family AGES!”

Alberge, Dalya. “Hans Christian Andersen’s visit was no fairytale for Dickens.” The Times 26 May 2008. http://entertainment.timesonline.co.uk/tol/arts_and_entertainment/books/article4004516.ece

Bredsdorff, Elias. Hans Andersen and Charles Dickens: A Friendship and Its Dissolution. Copenhagen: Rosenkilde and Bagger, 1956.

4 Responses to "The Tale of the Bony Bore"