If beginning authors or illustrators are going to get advice from someone already established in the field, how many dared to contact the bonafide master, Maurice Sendak, who started out as a window dresser for FAO Schwartz in New York City and, sadly, passed away two years ago? There are some wonderful stories of those newcomers who were bold enough to do so. 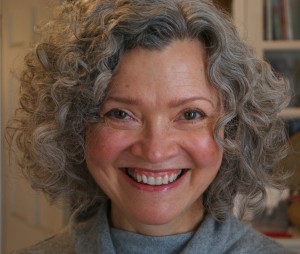 One such case is acclaimed author/illustrator Barbara McClintock, pictured right, who told us back in 2010 (when he was still with us), “Maurice Sendak has been extremely generous to many, many young illustrators just starting out. He’s been very kind and caring. I wouldn’t be where I am today, if it wasn’t for him.” Noting the many sides of Sendak, Selma G. Lanes wrote of his fiercer, more opinionated side, too, the one not always so patient with current trends in and attitudes towards children’s literature: “One morning, when a student mentioned a handsomely illustrated version of ‘Snow White,’ which he found admirable, Sendak took exception. ‘That prince and Snow White are antiseptic, completely bloodless,’ he said. ‘If they get to play Parcheesi on their wedding night, it’ll be a lot. And they’re going to spend the rest of their lives doing greeting cards together,’ he said as a clincher.” (One

wonders if he’s discussing Trina Schart Hyman’s 1974 adaptation of Snow White, a retelling with very pale-faced protagonists, indeed, and which lead to a notorious Kirkus review, a story that appears in our book.) However, Lanes went on to note his extreme generosity and gentle nature with the students he instructed in his classrooms at both Yale and Parsons School of Design.

In 1975, McClintock was attending school at Jamestown College in North Dakota when Sendak’s legendary In the Night Kitchen was released. Knowing that she wanted to write and illustrate children’s books—but with absolutely no idea how to go about doing so and with the absence at that time of organizations like the Society of Children’s Book Writers and Illustrators—she read an article about her favorite illustrator in Time magazine. “And they mentioned he lived in Ridgefield, Connecticut,” she told us. “So, I thought…well, he’d know how I should get involved in children’s books. He could give me advice, which is a little like thinking you could call Meryl Streep and ask for advice about becoming an actress. But I decided that I would call him. And I thought that I didn’t really have much to worry about, because he would do only one of two things: He would either tell me what I wanted to know or he’d hang up. I called Ridgefield Information, and I got his phone number. And I called him, and he answered the phone! You can tell this was a long time ago, because his number was still listed.”

Giving McClintock his undivided attention, he talked to her for approximately twenty minutes. “I told him that I was nineteen years old. I lived in North Dakota and he didn’t know me, but I really wanted to know how to go about writing and illustrating children’s books.” Sendak suggested she find a public domain fairy tale, work up sample illustrations to accompany it, put the illustrations into a portfolio, and move to New York. “And I asked him, ‘should I go to art school when I get there?’ And he said,’ absolutely not! They’ll put so much garbage in your head. It’ll take you ten years to get rid of it.’” (Sendak once said of his own career: “I’m convinced that the surface quality of my work matured so slowly because of my inner recoil from learning from others, this complete temperamental and psychic tune-out of mine from all schooling.”)

Barbara flew to New York, two weeks after her twentieth birthday. “I got a room…and took a bus into Port Authority and got off from the airport and I walked all the way to the hotel, which was on 57th and Lexington Avenue, because I was terrified of getting on a bus or, God forbid, the subway. I thought, oh, if I go in the subway, I’ll get lost. No one will ever find me. They’ll just discover a skeleton sort of propped up in a corner ten years from now, riding around on the D-train. But it was great.” McClintock rented a tiny room at a women’s hotel and, the next morning, called every publisher in the Manhattan Yellow Pages and made appointments with editors and art directors. “Even though Maurice told me that it’d be great to bring a portfolio, I didn’t know what a portfolio actually was. So, I had a wicker basket that I carried ink drawings in and just dumped them out on editors’ and art directors’ desks. One editor said, ‘oh, I’ve heard about you! This is a great gimmick. Don’t ever lose it!’” 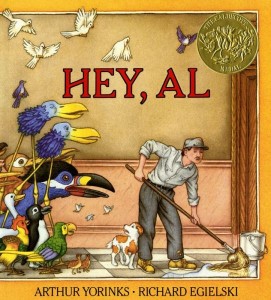 A few years before Barbara boldly called Sendak, another young author even more brazenly made his acquaintance with the great illustrator. Picture book writer Arthur Yorinks—already living in New York — read about Sendak in the New York Times and, at the age of sixteen, decided they had too much in common to let a meeting pass. Showing up one day on Sendak’s doorstep, Sendak turned him away but told Arthur he could phone him some time. After much hesitation and many hang-ups, Yorinks finally called and had a lengthy conversation with his literary idol. In fact, Sendak later described to Yorinks the art of Richard Egielski, one of his students of illustration at New York’s Parsons School of Design, telling Yorinks he suspected the two of them would be good picture-book collaborators. The problem was that, at that time, he couldn’t remember Richard’s last name. He gave Arthur a description—and such a glowing recommendation — of Richard, so detailed that, when Arthur later saw Richard on an elevator at Parsons, he knew it had to be the person Sendak has described. The two began talking, and history was made when they began collaborating on such books as Sid and Sol (1977), the Caldecott-Award-winning Hey, Al (1986), and 1991’s Christmas in July.

Yet another picture-book creator Sendak reached out to encourage was Harriet Pincus, whom he met while autographing books in a Village book shop. He was so impressed with her talent that he spent hours with her on the phone as well, convincing her to take on some professional assignments as an illustrator. It was with great pride he saw her first illustrated title published in 1967, Carl Sandburg’s The Wedding Procession of the Rag Doll and Broom Handle and Who Was in It. 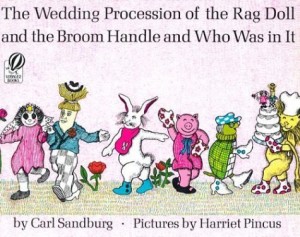 And then there are those moments When Sendak Comes to You. When Czechoslovakia-born artist Peter Sís made his way to Los Angeles in 1982 to produce a Czech-sponsored film for the 1984 Winter Olympics, little did he know that international instability would thwart his plans. The film was cancelled when Eastern Bloc nations boycotted the Olympics. Although the Czech Government ordered him home, Peter opted to stay in Los Angeles. While trying to figure out his next move and struggling to make a name for himself on the American art scene, he took a friend’s advice and sent artwork samples to Sendak. Much to his surprise, Sendak was impressed and not only called Sís – but called him collect. “He told me that if he called everyone who asked for help, he’d go broke,” Sís told Karen MacPherson of the Pittsburgh Post-Gazette. “He spent a long time with me on the phone … He opened the doors for me.”

And what was Sendak’s advice to Sís? But of course: “The first thing Sendak told me was to move to New York,” he told Allen Raymond Allen 1997. Sendak was right, Sís added: In 1984, he moved from Los Angeles to New York, jump-starting his career – one that has garnered him the 2012 Hans Christian Andersen Medal, three Caldecott Honors, a 2008 Robert Sibert Medal, countless other awards, and loads of critical acclaim.

In recent years, a handful of illustrators received direct instruction from Sendak, thanks to the Sendak Fellowship, established in 2010. Recipients of the grant, which gave aspiring artists the chance to meet and workshop with Sendak, found themselves in Connecticut and sitting next to and learning from the master himself at his very home. At Jules’s site, Seven Impossible Things Before Breakfast, author-illustrator Paul Schmid, 2010 grant recipient, talked in a 2011 post about the experience:

Last spring, out of the blue, I received an email informing me I was invited to spend a month with Maurice Sendak as part of the inaugural year of a thing called the Sendak Fellowship.

My first response was disbelief, and then to wonder who might be playing a joke on me, but early that September I sure enough found myself in Connecticut, sitting next to Maurice Sendak, talking about books.

The fellowship was one of those experiences that start out being so astounding one can hardly believe it, and end as something warm and personal and wonderful. Maurice is a funny, generous, brilliant man, who lives deeply. I’m convinced that is the reason his books are so substantial and enduring.

What did we do at the fellowship? We mostly worked. I drew, took long walks in the Connecticut woods, drew, wrote, talked to the Fellows, and drew and wrote some more. Kind of what I imagine paradise to be, except it wasn’t in Hawaii.

It was particularly wonderful to watch the other artists, Antoinette Portis, Aaron Renier, and Robert Weinstock work. We all had different styles, hours, and approaches, so it was enlightening to observe the many ways those incredibly talented artists come at their work.

My time with Maurice will remain the highlight of the experience, though. Thoughtful, passionate, idealistic, he has lived a life of emotional and intellectual honesty and courage.

Schmid wrote at his own site a moving post about the fellowship experience after hearing about Sendak’s passing. Last year, 2011 Fellow Sergio Ruzzier also wrote here a tribute and a bit about his experience with Sendak during the fellowship.

Will the Fellowship continue, now that Sendak is gone? You bet, according to this Vermont news site, which announced that cartoonist and illustrator Harry Bliss has been announced as one of two 2014 grant recipients. The piece states:

Designed to nurture the talents of artists who tell stories will illustration, the fellowship grants its recipients five weeks of bucolic isolation, the better to complete their work. … This year, the location of the fellowship will be at another of Sendak’s properties: the 150-acre Scotch Hill Farm in rural Cambridge, N.Y., located about 30 minutes from Manchester, Vt.

While the field of children’s literature mourns the loss of the great-granddaddy of the modern picture book, we take comfort in knowing that his generosity lives on.

Danielson, Julie. “Paul and Petunia Prior to Breakfast (Not to Mention a Sendak Sighting).” Seven Impossible Things Before Breakfast. 8 February 2011.

MacPherson, Karen. “Peter Sis to be ‘Read All Over.’” Pittsburgh Post-Gazette. 4 November 2005.

Photo of Barbara McClintock used with her permission.

Photo of Sendak and Schmid used with permission of Paul Schmid.

17 Responses to "The Sendak Effect: Or, Move to New York Already!"