The first draft of Wild Things! included a chapter on some hidden delights of children’s literature (now a shorter “interlude” chapter in our book), as well as a loooong chapter about some true tales behind the creation of children’s books. The three stories below are just a few of many stories we had that worked for either one (or, in some cases, both) of those chapters — but were cut from the book (as all the stories at this site were).

They are stories about squeamishness. Indecent exposures. Or, simply, editors and readers not seeing eye to eye with their authors and illustrators on what is or is not acceptable for children to see — or what they think children will understand. Leo Lionni’s editor for A Busy Year, for instance, asked him to remove the word “manure,” as the publisher felt that children wouldn’t be familiar with the word. Lionni refused. “He told me they should look it up,” his granddaughter Annie told us.

And in this post Sergio Ruzzier gets the best line of all. We were mighty tempted to type something like The Saga of the Unobtrusive Penis as our post’s title today. 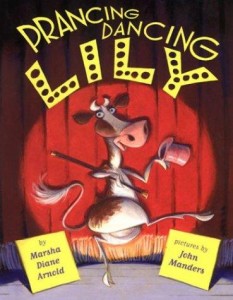 “One thing you should understand about cows: they have udders,” John tells us. “Big, bulbous, jiggly, pendulous body parts located somewhere in the cow’s nether regions. When you stand a cow up to dance, suddenly her—er, business is thrust center-stage. Now, if you’re a kid you’ll find that hysterically funny. If you’re a children’s book illustrator with arrested development (like me), you too will find that hysterically funny. Unfortunately, the editor, art director, and even the author had misgivings about having Lily’s embonpoint foisted upon the reading public.”

After seeing initial sketches, the editing team asked John to tone down the teats, which he didn’t do nearly enough, and he eventually had to re-work even his final paintings, reducing the udders to “the size of a smallish ping pong ball… So I made the changes. No use crying over it. Before I did, though, I got the original funny version of the Rockettes scene photographed and made a dandy Christmas card out of it.” 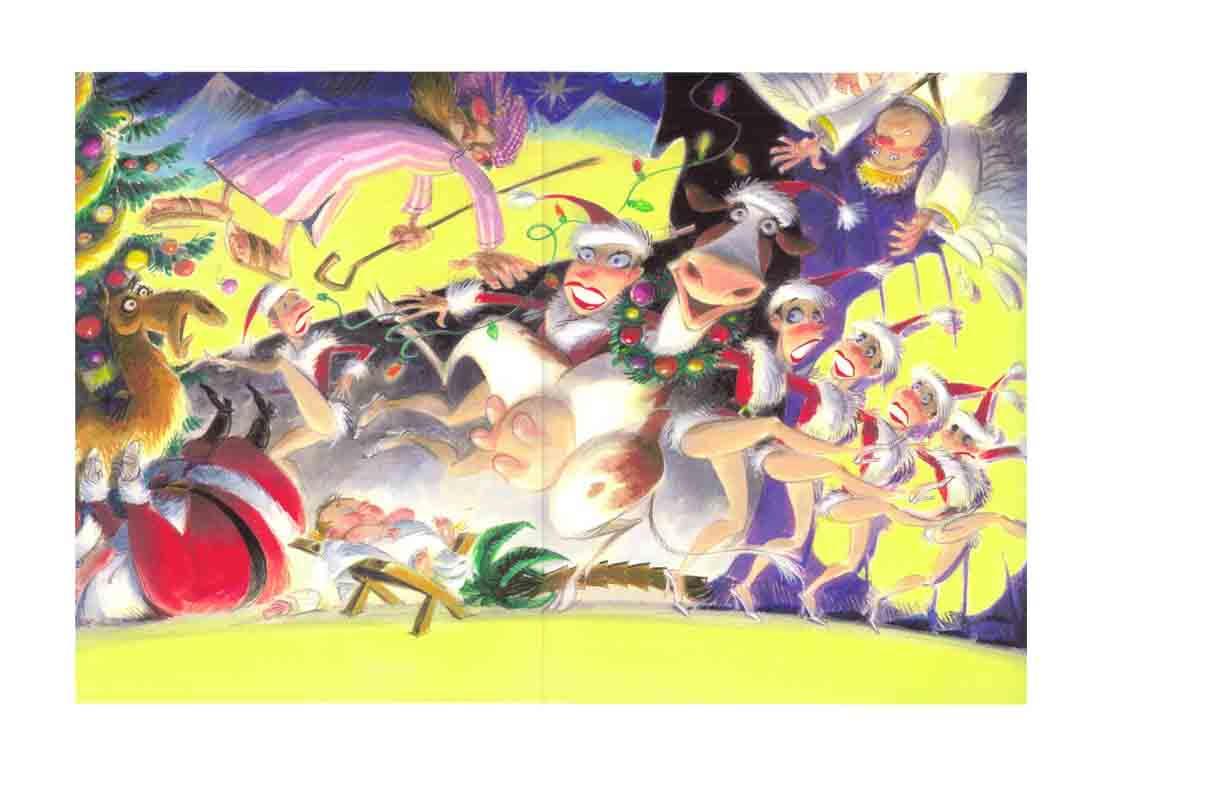 All’s well that ends well, though: “Prancing, Dancing Lily by my pal Marsha,” John says, “is now available as an app. Yes, for the app, Marsha generously allowed me to re-paint Lily’s lady-bits back to their original glory.” 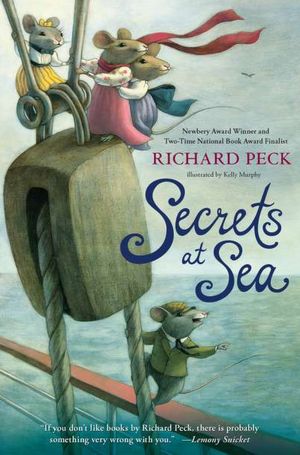 Illustrator Kelly Murphy recalls her own close call with indecent exposure when working on the interior illustrations for Richard Peck’s 2011 children’s novel, Secrets at Sea. In the book, two mice sisters are at a grand ball on a steamship liner, headed for England. In order to successfully guide their human counterparts through the complicated maze of royal etiquette, they hitch a ride on their clothing. One of the mice, Beatrice, hangs on to the matriarch of the family, who is in danger of being rebuked by a not-so-friendly attendant of the Queen of England’s sister. As this attendant is about to scream at this heavyset woman, Beatrice emerges from her bosom and the perturbed attendant faints.

As the illustrator, Murphy was directed to depict this image: “Richard is insistent on this image above all others, fyi,” the publisher told her. “And of course,” Kelly adds, “Richard does an impeccable job of describing the scene with sass and humor. So, I went to the drawing board. It turned out that my first version showed a bit too much of Mrs. Cranston. I kept remembering Richard’s description of her shoulders being bare and looking like some kind of ham… so I ran with it. I had to bring the neckline up a tad high.” 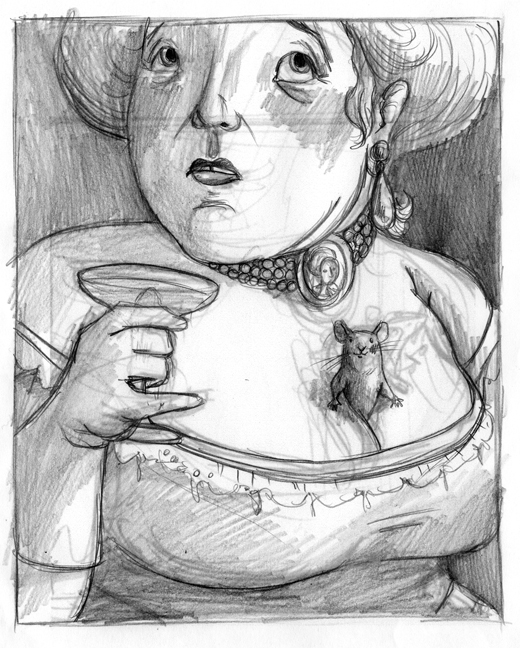 In Kelly’s next version, she had made the fabric too stretchy between each breast. “We’d also like to reduce the shading a tiny bit at the center of her cleavage; we worry it makes the dress looks slightly too sheer,” the publisher told her. 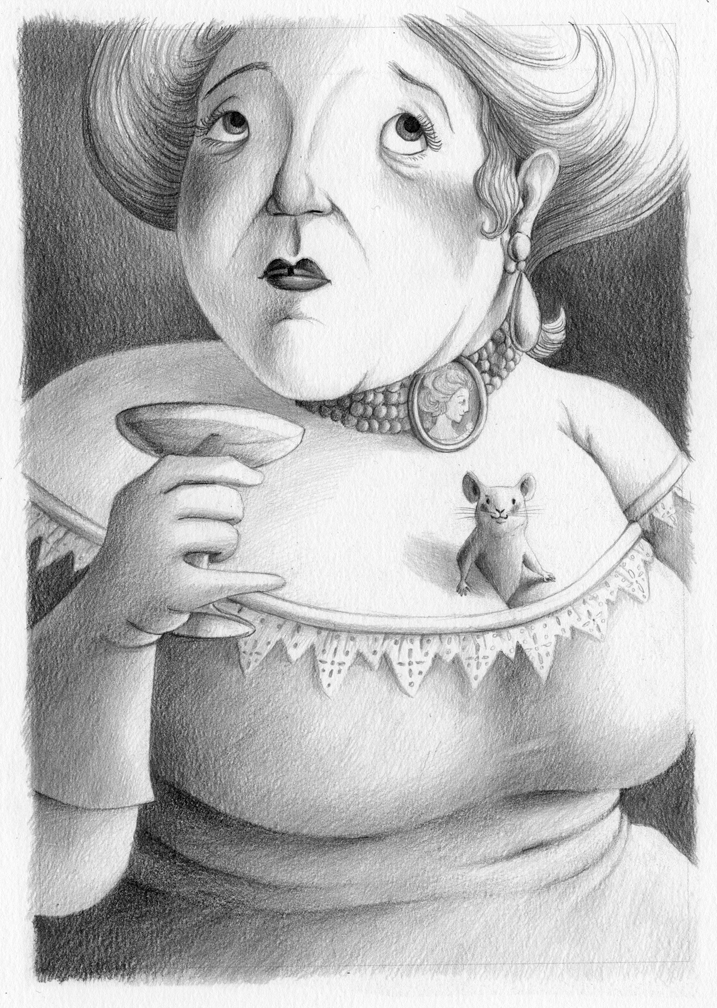 “Typically, I am on top of these kinds of things,” Kelly tells us, “so I laughed with each revision. No word was made about the poor mouse…crushed between these two mountains.”

And the final illustration? 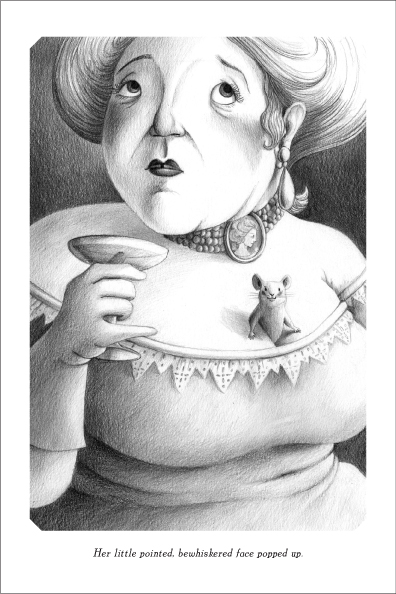 “Looking back on these,” Kelly jokes, “it was a matter of millimeters that could have plummeted this image int 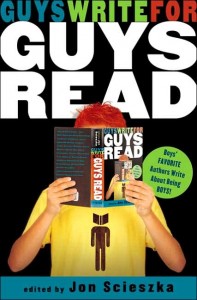 o the realm of smut. I think this all would have been more interesting if it was the mouse who has cleavage!”

In Sergio Ruzzier’s contribution to Jon Scieszka’s Guys Write for Guys Read, he submitted a drawing, which he created in elementary school, of a monster with his penis in plain sight. To his surprise, the publisher didn’t censor it, though it did anger an Amazon customer reviewer or two.

“I read an Amazon customer review,” Sergio told us, “by a seventh-grade teacher who wrote, ‘there’s one illustration in the book that shows recognizable male genitalia on a monster drawn when the artist was in fifth grade… Unfortunately, I’m going to have to take a Sharpie to that portion of the illustration. I’d rather not, but we live in interesting times.’ Commenting again about that same penis, the same [person] wrote, ‘It’s unobtrusive, but it’s there.’ ‘Unobtrusive’ is the worst thing you can say about a penis.” 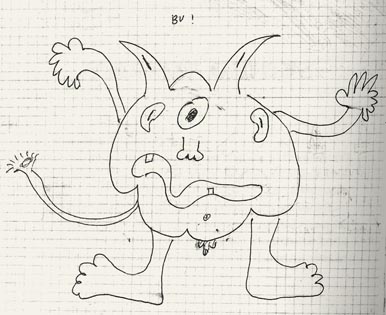 In another drawing he did for Emily Jenkins’ Love You When You Whine, the protagonist, a little kitten, pelts her friend, a little chicken, with a bunch of eggs. “I thought they would ask me to make the scene less morbid, but they didn’t.” 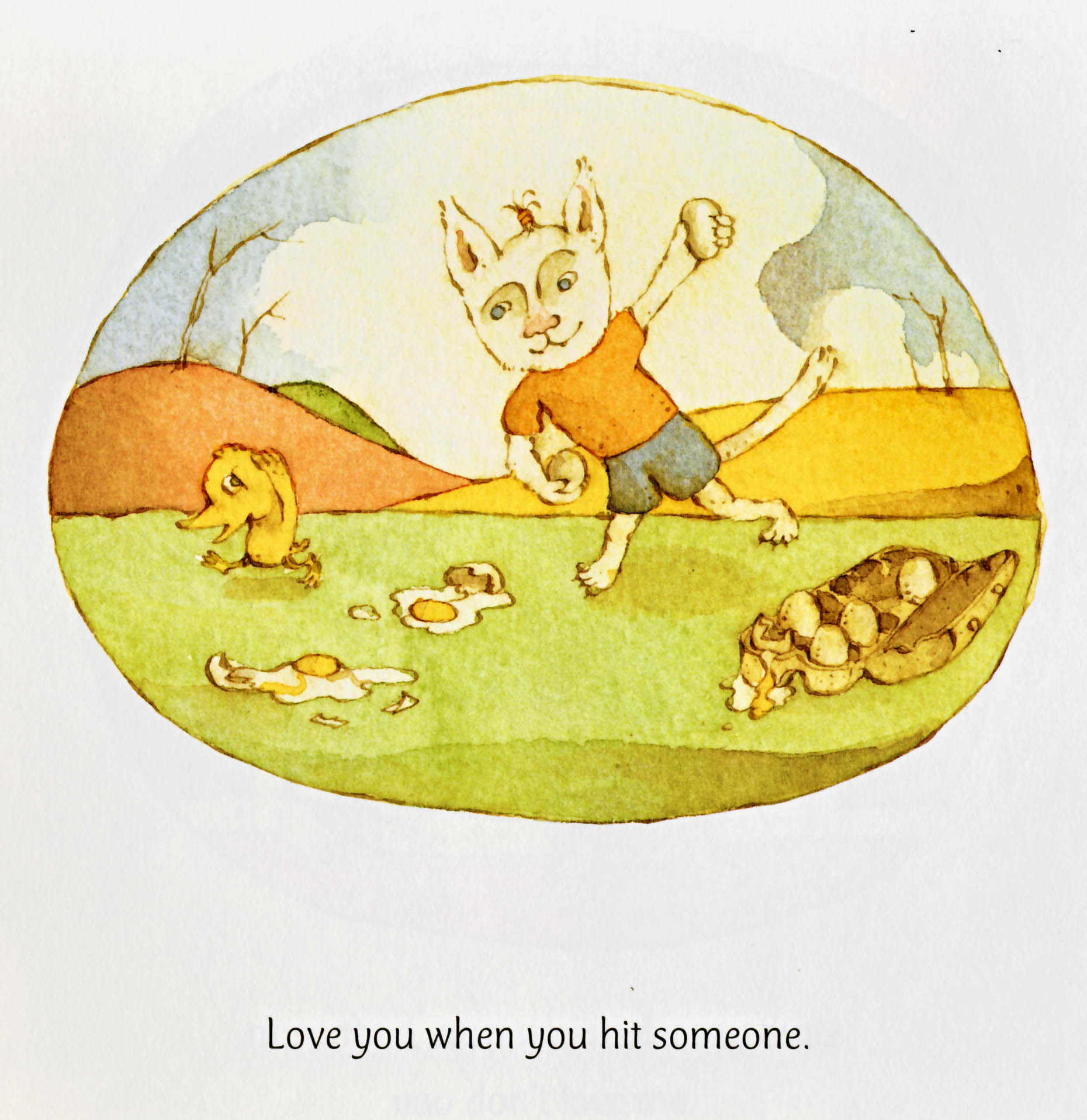 If a monster’s penis wasn’t enough for you today, we’re going to hand the site over tomorrow to a children’s book author and poet, who will share his own story of indecent exposure, this one of a harpy’s breasts. Until then …

One Response to "Udder Indecencies"