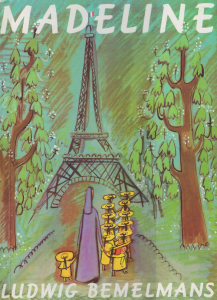 Today’s post pays tribute to Ludwig Bemelmans’ beloved picture book, Madeline, named a 1940 Caldecott Honor book. This year Madeline is celebrating (complete with an anniversary edition from Viking) its 75th birthday. We thought we’d celebrate its existence today with some art from the book, which we secured from the publisher.

Wild Things! includes a Madeline story in a short chapter called “Scandalous Mysteries and Mysterious Scandals,” as well as the fun fact behind Madeline’s first appearance in print. We also include a bit about Bemelmans’ inspiration for Madeline, which involves a sack of lobsters, a bakery truck, a hospital stay, cute little bunnies in ceilings, and a prime minister of France.

Bemelmans, who evidently found great inspiration in restaurants, is said to have first sketched Madeline on the back of a menu in Pete’s Tavern at Irving Place and Nineteenth Street in New York after having once upon a time seen a line of school girls crossing the Pont Royal while lunching at Le Restaurant Voltaire in Paris. He also talked in his 1954 Caldecott acceptance speech for Madeline’s Rescue about how some of the details of Madeline’s life at school came straight from stories that his mother told him of her childhood in the convent of Altoetting in Bavaria.

I visited this convent with her and saw the little beds in straight rows, and the long table with the washbasins at which the girls had brushed their teeth. I myself, as a small boy, had been sent to a boarding school in Rothenburg. We walked through that ancient town in two straight lines. I was the smallest one, but our arrangement was reversed. I walked ahead in the first row, not on the hand of Mademoiselle Clavel at the end of the column. 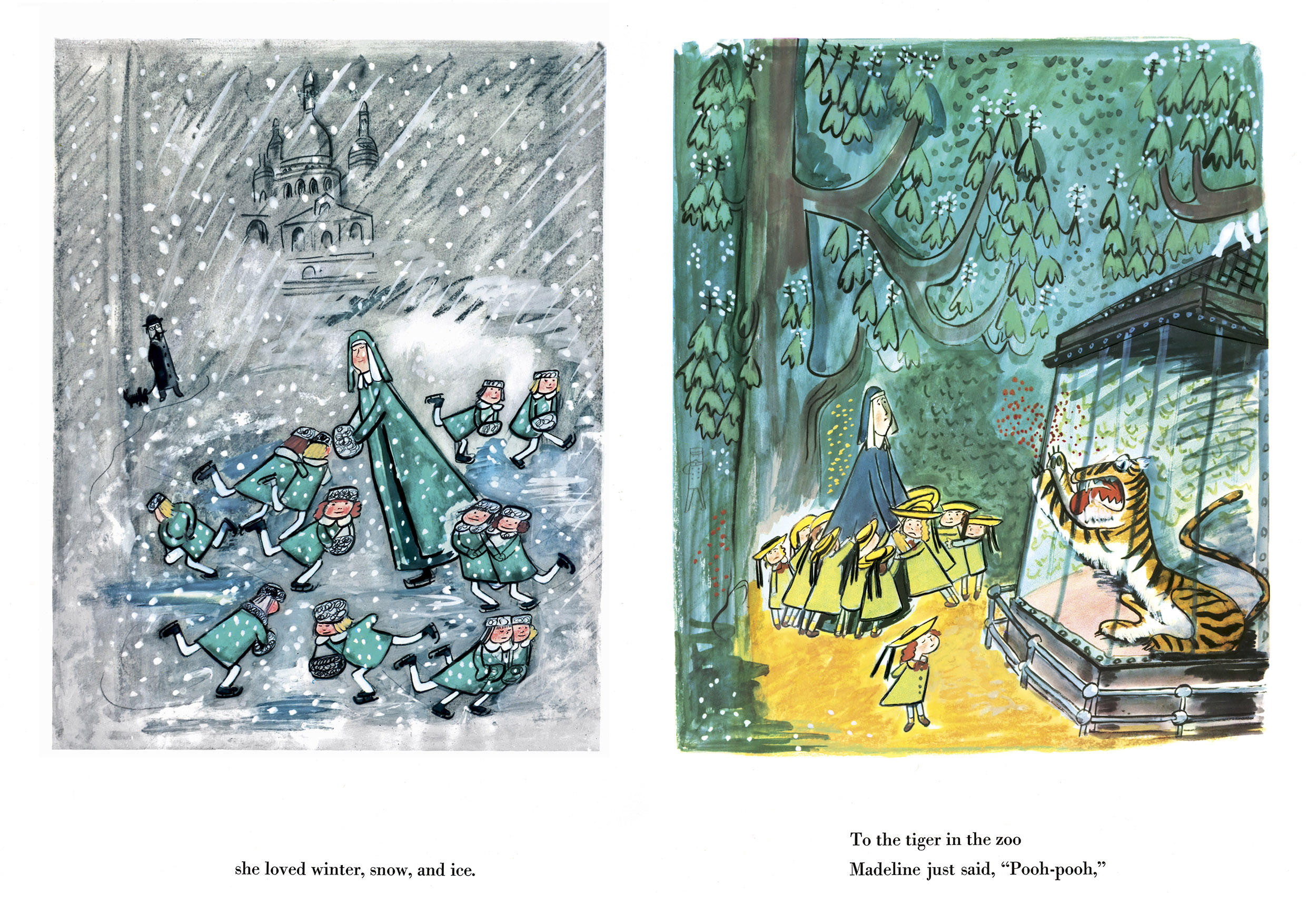 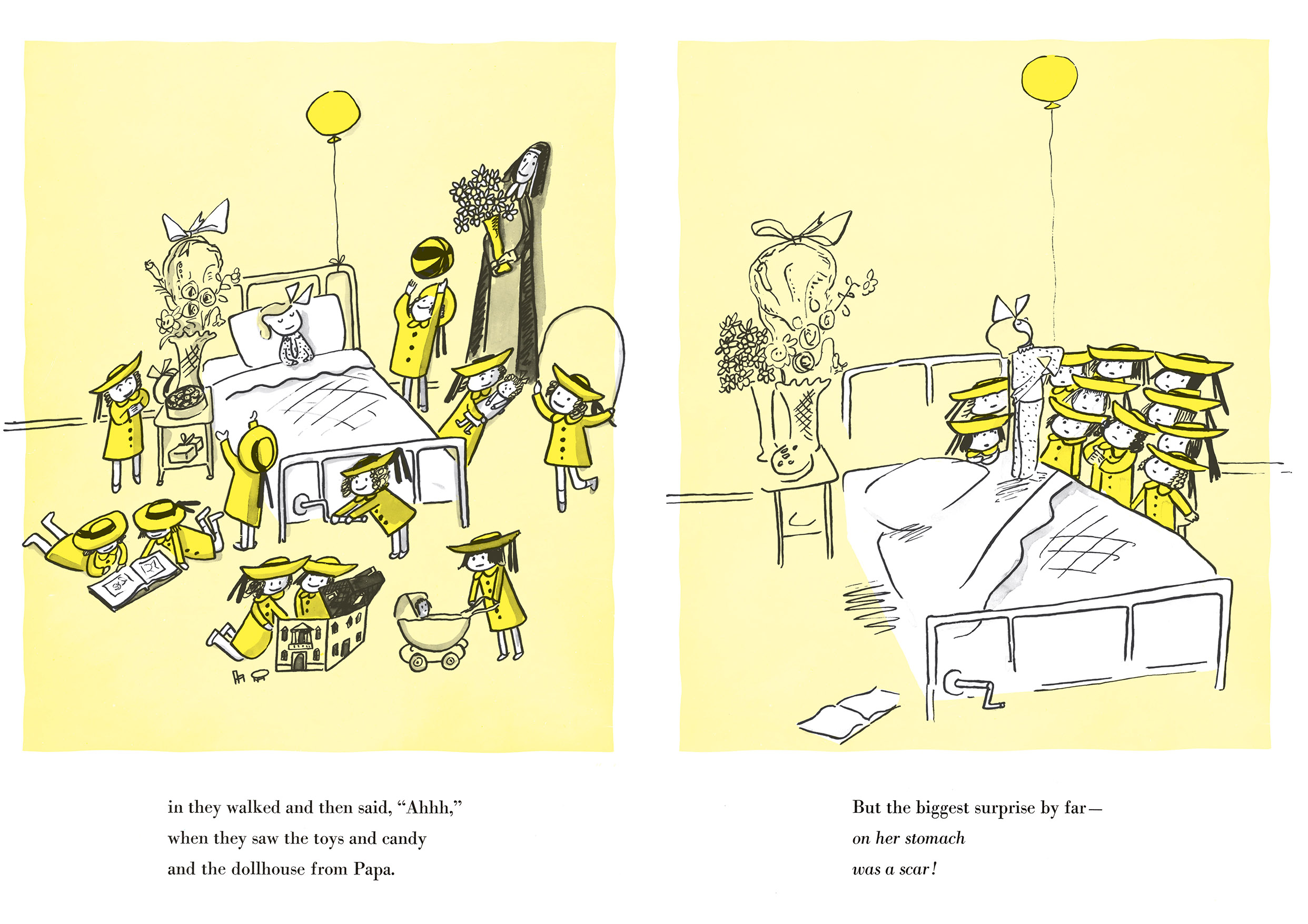 Incidentally, we wondered, as many people do: Is Miss Clavel a teacher or a nun? Madeline fans seem divided on the matter. Some point to her fashion choices and insist she’s a nun. Others respond, “If she’s a nun, why isn’t she called Sister Clavel?” What is she then – a caretaker, a guardian, a teacher, a nurse, an orphanage boss-lady, a sister – or nun of the above?

Mystery solved: In this 2013 NPR piece, author-illustrator John Bemelmans Marciano—the grandson of Bemelmans, who has continued the Madeline series—sets the record straight: “It’s not an orphanage; she’s not a nun; and Madeline is not French,” Marciano clarifies. “I used to get almost indignant over it, but these things take on a life of their own and sometimes misperceptions are the stuff of legends.” (The old house covered in vines is actually a boarding school, Viking Press likes to point out to readers today.) 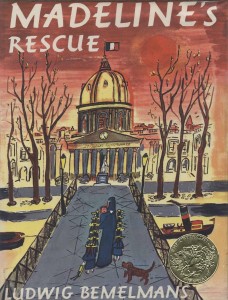 And what about Madeline’s Rescue, which received the 1954 Caldecott Medal? Bemelmans had the daughters of children’s book author and New Yorker poet Phyllis McGinley to thank for its very existence. They told him that they wanted another Madeline book and that it absolutely must have a dog in it. “So I offered them fifty cents apiece,” Bemelmans recalled, “if they would give me an idea, for I was paralyzed with lack of imagination. The children did not even go out of the room. They came with hands held out, and after I paid them they stated the plot: ‘There’s a dog, see–Madeline has a dog. And then the dog is taken away but it comes back again, maybe with puppies so all the girls can have dogs.’”

John has stated that Madeline is part Bemelmans and that the author was always the one who got in trouble, as well as always the smallest one in class. Fans of the book can consider themselves lucky to even be reading about Madeline and its sequels: Bemelmans once noted that no one wanted to publish the book initially, as it was considered too sophisticated for children. Indeed, May Massee of Viking Books was the editor who declared, as Miss Clavel might have, something is not right, turning down the book in what Leonard Marcus described as a “rare lack of judgment,” leaving it game for Simon & Schuster to snag.

The New York Historical Society is currently celebrating Bemelmans and his masterpiece with “Madeline in New York: The Art of Ludwig Bemelmans,” an exhibit that began in July and continues until October of this year. Mediabistro has a good piece here for which they talked to exhibition curator Jane Bayard Curley of the Eric Carle Museum of Picture Book Art. The Carle will also celebrate at the end of this year and heading into next; more information is here.

Finally, the BBC News site has a recent article about the New York Historical Society’s exhibit, which includes video and an interview with John. That is here.

4 Responses to "75 Years Old, and Still Showing off her Scar"