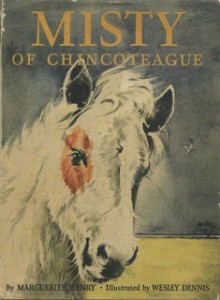 Today we’ll tip our hat to a horsey book.  Or rather, THE horsey book.  This story originally premiered on Peter Sieruta’s blog, Collecting Children’s Books, back in 2008 in a post called Hoofprints and Pawtographs.  We cleaned it up a bit for the book, but ultimately it didn’t quite fit in with our other chapters.  A pity since it contains one of the best ALA Conference photographs of all time (which, for the longest time, we had hoped would be the very cover image for Wild Things!).  For all you fans of Misty of Chincoteague, you’ve never heard a tale quite like this.

Author Marguerite Henry first saw the real Misty on “Pony Penning Day,” an annual event during which the wild ponies on Assateague Island, just off the coast of Virginia, are rounded up and swum across the channel to Chincoteague, where they are sold at auction. (Pony Penning Day continues to be held every summer. Tourists—many inspired by Henry’s book—still come to witness the stirring sight of the ponies swimming to their new home.) At Chincoteague, Mrs. Henry met “Grandpa Beebe,” who bought some of the wild ponies, and his grandchildren, Paul and Maureen, who helped gentle the feral animals. Names unchanged, the Beebe family and their community all appear in 1947’s Misty of Chincoteague; Henry paid $150 to borrow the pony from the Beebes and raise it in a meadow beside her Illinois home as she wrote the book, which won a 1948 Newbery Honor.

The formerly-wild pony became something of a literary sensation after the publication of Henry’s novel. In fact, she began moving in rarified literary circles. Named an honorary member of the American Library Association, Misty was invited to their annual convention in Grand Rapids, Michigan, where she rode the elevator up to the seventh floor of the Pantlind Hotel to attend a party in her honor and dropped by many meetings and lectures, as shown in the photograph below. Misty is the one not wearing a hat. 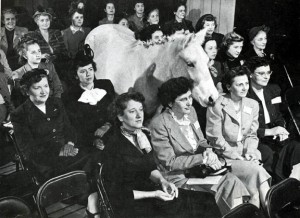 We happen to think the librarians who bravely sat right behind her deserved an award as well.

And where is Misty now? Well, she’s long dead, but her taxidermied self, complete with glassy-eyed stare, is on display for tourists to see at the Beebe Ranch in Chincoteague, Virginia. One can only imagine the number of young readers who run inside the doors only to come to a standstill and say, “You mean Misty is…is” [loud gasp, followed by that giant hiccup which always comes right before the sobs] “…is dead?” while their distressed mothers respond, “Just pat the pretty pony, sweetheart, pat the pretty little…stuffed… pony.”

10 Responses to "Play Misty for Me"