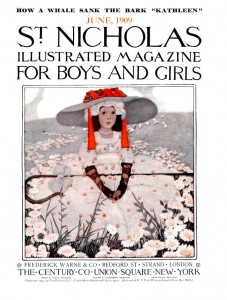 Sometimes people stumble into this business, and sometimes it feels like they were born into it. Not only that, but they simply don’t mess around and waste their time . E. B. White, who later in his life brought us the loving and intelligent Charlotte and the shy and pleasant Stuart Little, was first published as a child, receiving an award in 1909 at the tender young age of nine from Woman’s Home Companion for a poem about none other than a mouse, topping that off with gold and silver badges from St. Nicholas Magazine. So, what about those other overachievers who kick-started their career at eye-poppingly young ages?

In the world of contemporary children’s literature, Christopher Paolini made a splash as the author of the Inheritance Cycle (Eragon, Eldest, and Brisingr). Homeschooler Paolini was fifteen when he began the first draft of Eragon, which was eventually published by his parents, who set to work promoting the title at libraries, schools, and bookstores. In the summer of 2002, author Carl Hiaasen,
whose stepson read a copy of the book, brought Eragon to the attention of his publisher, Alfred A. Knopf Books for Young Readers, and Random House eventually published Eragon in 2003. Setting out in a long wizard’s robe and a goofy hat to promote the series, the teenaged Paolini had gumption. Or serious cajones. Take your pick.

Paving his way was author Lois Duncan — who has written for all ages but is most beloved for her YA suspense novels, like Killing Mr. Griffin. She sold her first story at the age of thirteen and wrote her first book at fifteen. And during his senior year of high school, beloved picture book author/illustrator Kevin Henkes completed the draft of what would become his first published picture book, All Alone. 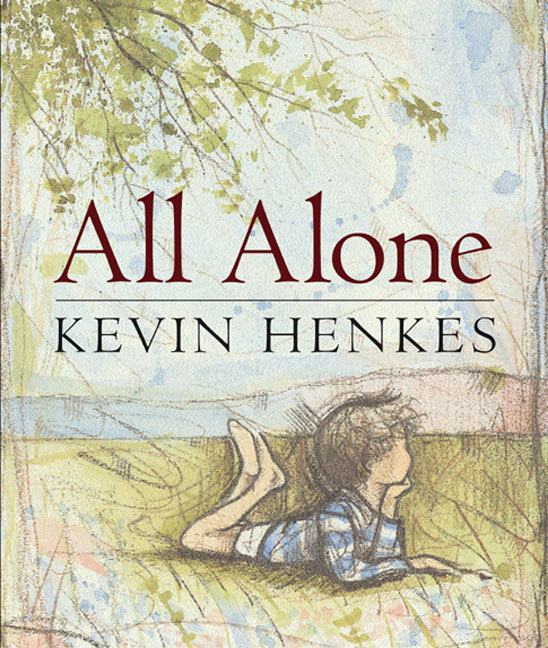 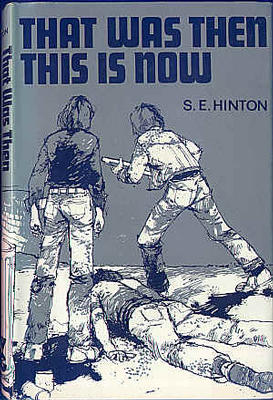 The name Susan Eloise Hinton may not be instantly recognizable, but if you lop off a few letters, she becomes pivotal young adult author S. E. Hinton. The abbreviation was a marketing decision to hide the fact that a woman had written a novel about teen boys and violence, 1967’s The Outsiders — – much like when J.K. Rowling first launched the Harry Potter series and her British publisher suggested she use her initials so that it wouldn’t be immediately clear that a woman wrote a book they assumed would appeal primarily to boys. “Long credited with changing the way Y.A. fiction is written, Hinton’s novel changed the way teenagers read as well,” wrote Dale Peck in the New York Times,  “empowering a generation to demand stories that reflected their realities.” But what many people don’t know is that this iconic novel about teenagers was written by a teenager herself: Hinton wrote it her junior year in high school, even producing an article for the New York Times Book Review after the publication of The Outsiders, making her a household name before her college graduation. After that, she suffered from writer’s block until her boyfriend—and, later, husband—told her he would not take her out unless she wrote two pages of her follow-up novel on the day of their date. That manuscript became That Was Then, This Is Now. 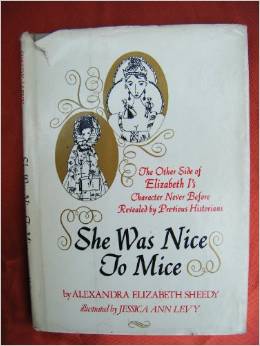 Making her publication debut at an even younger age than Hinton—and tying with Canadian author Gordon Korman, who wrote his first book, This Can’t be Happening at Macdonald Hall, when he was twelve—was Alexandra Elizabeth Sheedy, a.k.a. Brat Packer Ally Sheedy of angsty-’80s-teen-flicks fame (The Breakfast Club and St. Elmo’s Fire). Sheedy, whose mother Charlotte Sheedy is a literary agent, wrote the bestselling children’s book She Was Nice To Mice: The Other Side of Elizabeth I’s Character Never Before Revealed by Previous Historians, published in 1975 by McGraw Hill, when she was but a mere twelve years old and a student at New York’s Bank Street School. The book, the lively memoir of a literary mouse living at the court of Elizabeth I, helped launch her acting career, since it was an appearance on The Mike Douglas Show to promote her book that caught the eye of an agent.

One of the many reasons parents are inclined to hold fast to the ephemeral bits of arts and crafts produced by their offspring may have to do with their hope that someday that child will become famous. Then, when the biographers come seeking background information on how this person came to be such a genius, the parent will produce the art and/or writing and all will be revealed. Consider the case of Grace Lin. Here we have a Newbery Honor- and Geisel Honor-winning author, as well as an author of numerous picture books. In Ms. Lin’s semi-autobiographical early chapter book, The Year of the Dog (2006), her character Melody participates in a national children’s book-making contest. In Ms. Lin’s real life she did the same: The year was 1986, and sixth grader Grace Lin’s class was studying world religions. Grace went with Taoism and then made a little book about it. Called Verdance, it featured flowers and the occasional wind fairy. As Grace says, “I didn’t have a great grasp of Taoism, but I still got an A!” Not only that, but when Landmark House, Ltd. held its annual book contest, Grace placed fourth in the 9-14 category and was awarded a whoppin’ $1,000. Not too shabby. 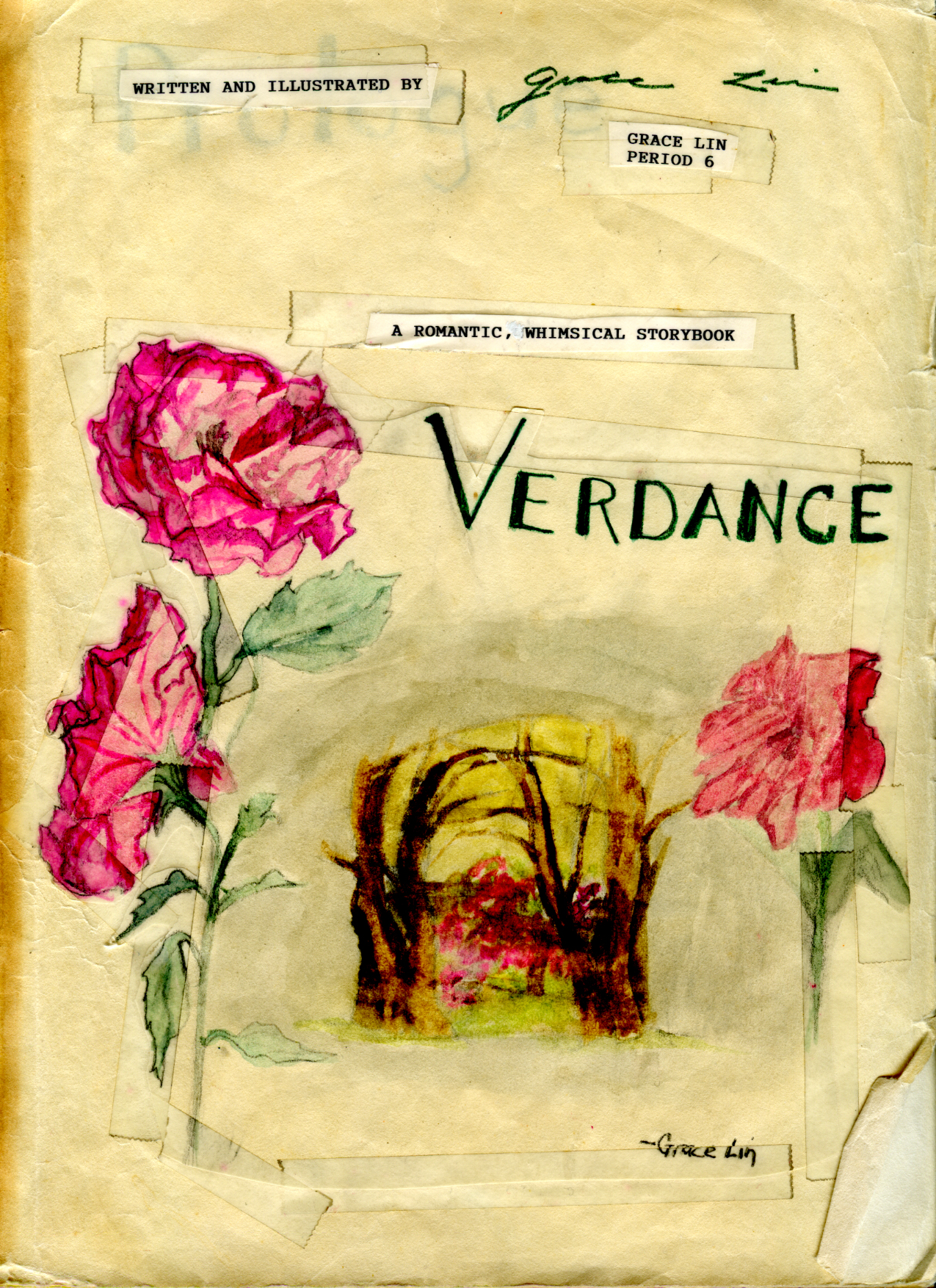 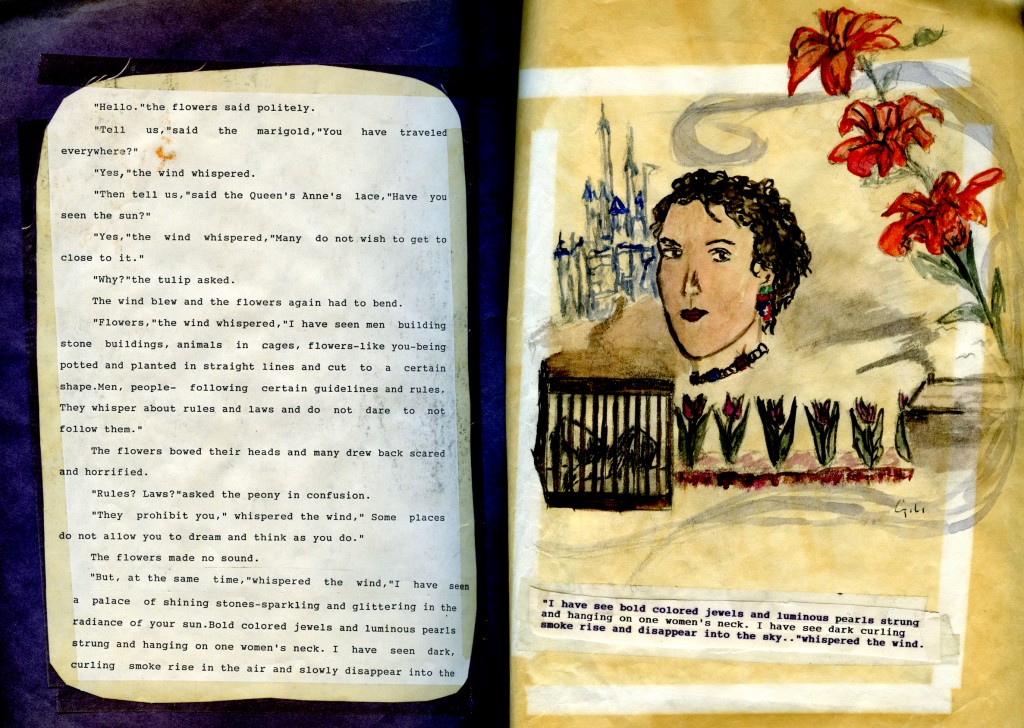 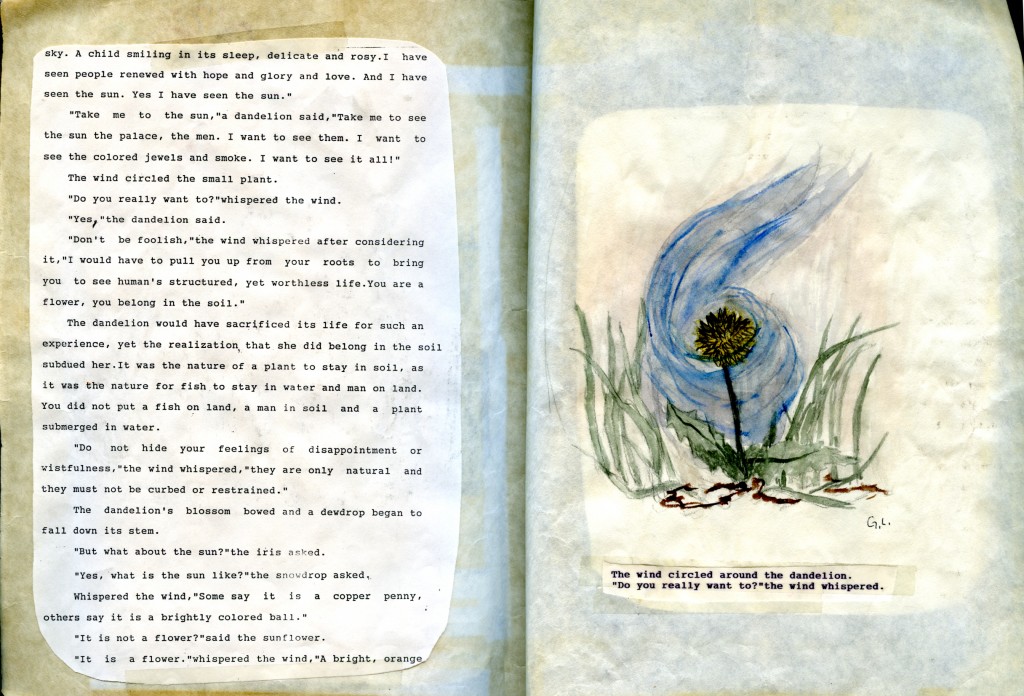 Years later, Grace decided to look at the winners and see what had won in her year. In her category, a kid named Isaac Whitlach won for Me and My Veggies. But when her eyes looked a little further, a familiar name cropped up in the 14-19 age range: Dav Pilkey. Yes, the man who would one day sweep the world with his tales of Captain Underpants, had actually won first place back in 1986 for his book World War Won at a mere nineteen years of age. 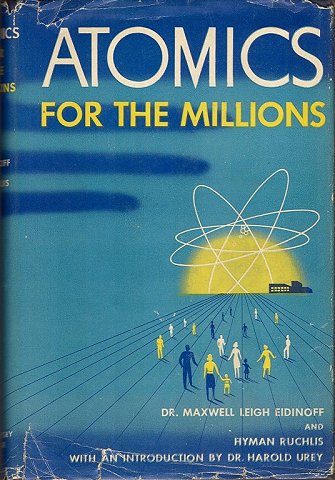 Shall we jump from sixth grade to twelfth grade? It’s not that much of a jump from grade school spelling tests and book-making contests to high school’s science labs full of Bunsen burners, frog dissections and the bracing smell of formaldehyde.

One of the premiere children’s book creators of our time was taking such a course, circa 1947, under one Hyman Ruchlis, a “fatherly” science teacher at Brooklyn’s Lafayette High School. After co-authoring Atomics for the Millions, a science textbook, with Dr. Maxwell Leigh Eidenoff, who worked for the Atomic Bomb Project at Columbia University and the University of Chicago, Ruchlis asked one of his students at Lafayette High, a gifted young artist, if he would provide the illustrations for the volume. The student agreed to do the artwork in exchange for $100 and — here’s a kid after our own hearts — a passing grade in class. “Never much of a science student,” wrote Selma G. Lanes, “the neophyte illustrator struggled valiantly to keep his approach lighthearted and, at the same time, accurate.”

That kid also got his name on the title page: 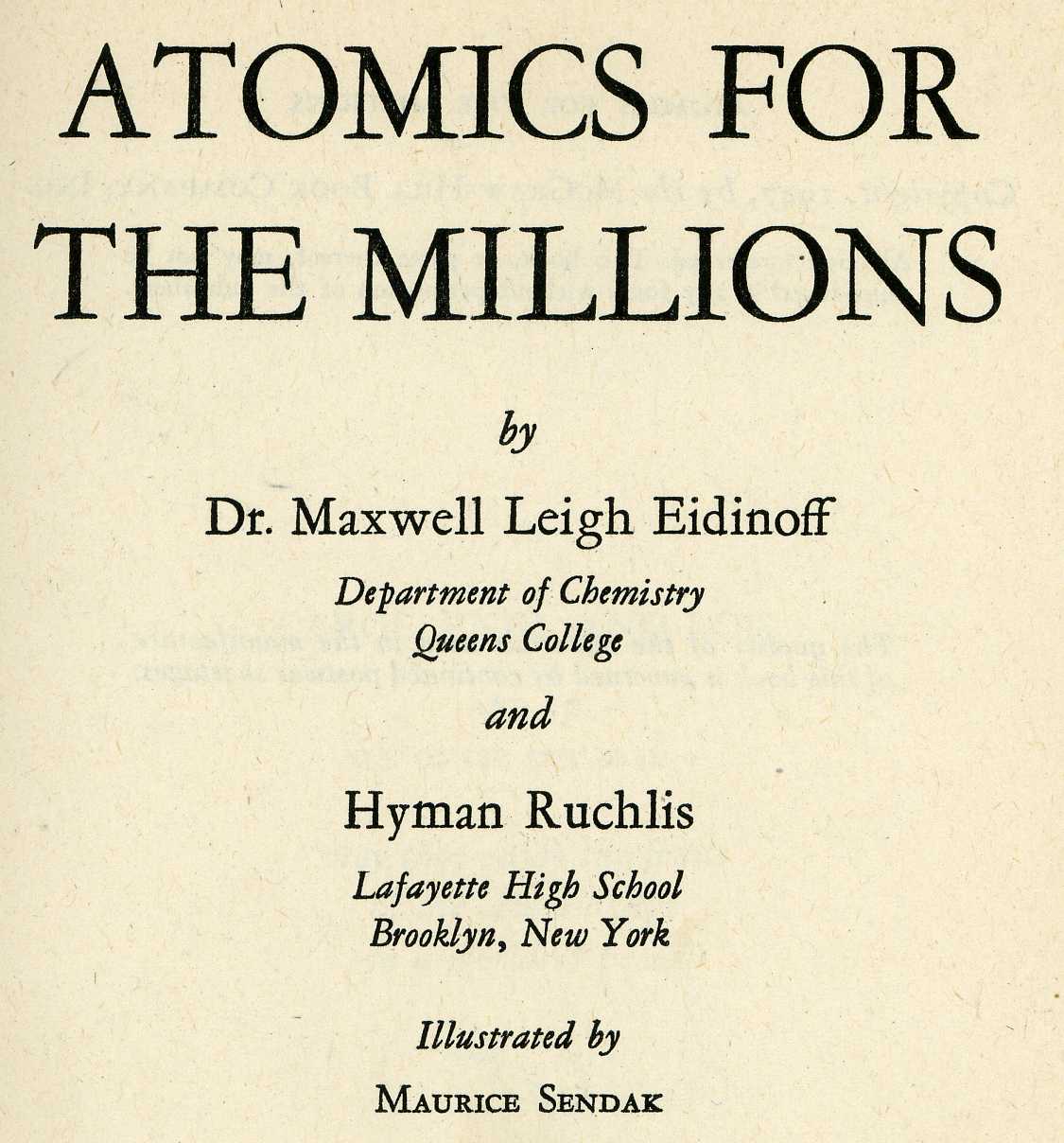 Atomics for the Millions was the first-ever book illustrated by Maurice Sendak. He was only nineteen when it was published, and it would be another four years before he illustrated his first children’s book, The Wonderful Farm by Marcel Aymé. 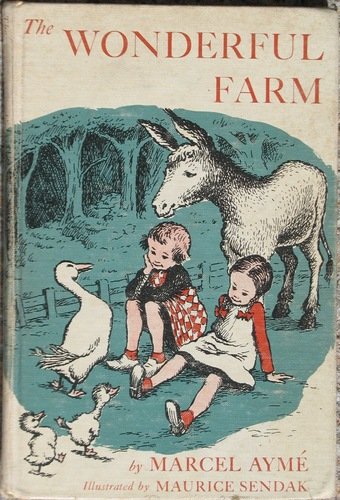 Back in 2008, Peter wrote a post  on “Teeny-Tiny Authors,” a post on the youngest of the young — those, that is, published by mainstream, commercial houses. A four-year-old author? You bet. Peter’s post is here, if you’d like to read more.

2 Responses to "The Precocious Ones"