It had all the elements of a great mystery – puzzling pictographs, confusing clues, and a buried treasure for the taking! Who would think that a children’s book would lead to such scandal and international disappointment? 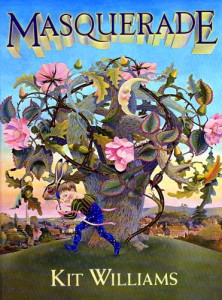 It all started when a British publisher suggested artist Kit Williams “do something no one has ever done before” in a children’s book. That’s when Williams came up with Masquerade, the tale of Jack Hare carrying a valuable treasure from the moon to the sun. Upon his arrival, the hare realizes he has lost the treasure somewhere along the way. Sixteen very detailed paintings accompanied the story and, if the reader could follow the complex clues and resist the red herrings hidden in the artwork, he or she could pinpoint the treasure’s location. What made Masquerade so irresistible to readers was that Kit Williams had buried a real treasure, a gold and jewel-encrusted pendant shaped like a rabbit, somewhere in England. All a reader needed to do was follow the book’s clues, grab a shovel, and dig!

Shortly after the book’s 1979 publication, England became dotted with holes and hollows as Brits went crazy searching for treasure.

It took nearly three years, but in March 1982, a man who called himself Ken Thomas submitted a crudely-drawn map by mail, pinpointing the location of the buried treasure in Ampthill, Bedfordshire. Williams confirmed that Thomas had discovered the right spot and told him to start digging. Six more years would pass before a newspaper revealed that “Ken Thomas” was really a man named Dugald Thompson — and he had cheated to win the prize.

You see, Thompson’s business partner was the boyfriend of a woman named Veronica Robertson – and Robertson was a former girlfriend of Kit Williams. Veronica had learned the general location of the buried treasure during the years she lived with Williams. She had revealed the location not out of greed, but because the two other men led her to believe they’d donate the valuable prize to animal rights charities. Needless to say, no fluffy bunnies—or animals of any kind—benefited from the discovery of the buried treasure. 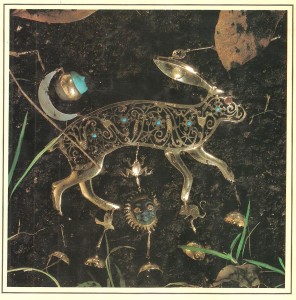 The great irony about the Masquerade scandal was that, even with Veronica Robertson’s assistance, Dugald Thompson never did locate the exact burial spot of the treasure. Two high school physics teachers had legitimately pieced together the clues and discovered where it was buried. Unfortunately, the two didn’t spot the treasure while digging, and actually left it lying among the piles of overturned dirt, where the lurking Thompson plucked it up for himself.

More than thirty years have passed since the golden hare was unearthed, but used copies of Masquerade continue to sell briskly to daydream believers who have somehow convinced themselves that this treasure still lies buried, waiting for them to discover its hiding place.