Now and then, it’s fun to hear the story behind the creation of some of your favorite picture books. As we were researching and writing Wild Things! (and since we have a chapter in the book devoted to subversive books, which led to this conversation), we began discussing some of our favorite cryptic picture books. Or what Pamela Coughlan, a.k.a. MotherReader, has for years simply called “Weird-Ass Picture Books.” Just two years ago, Roger Sutton, Horn Book editor, started a great discussion about weird books and risk-taking in publishing, a conversation that reminds us all how hard it is to nail down what makes a book truly weird. (Could it be that they’re “quirky, unique and deeply personal,” as Mark Alan Stamaty ventures in an interview linked below?)

Here today are stories of two quite cryptic picture books, stories which didn’t make it into Wild Things! These are but two wonderfully weird books, and we’d love readers to weigh in at the comments below. What are your very favorite oddball picture books? Do share, if you’re so inclined.

In early 1970s’ America, the hippie culture was still in full swing, and the social values of the country were becoming increasingly progressive. Along came a wonderfully bizarre, hippy trippy morality tale of a picture book, a reflection of that time, which would become a cult favorite decades later, 1971’s The Blue Balloon by Frank Asch. 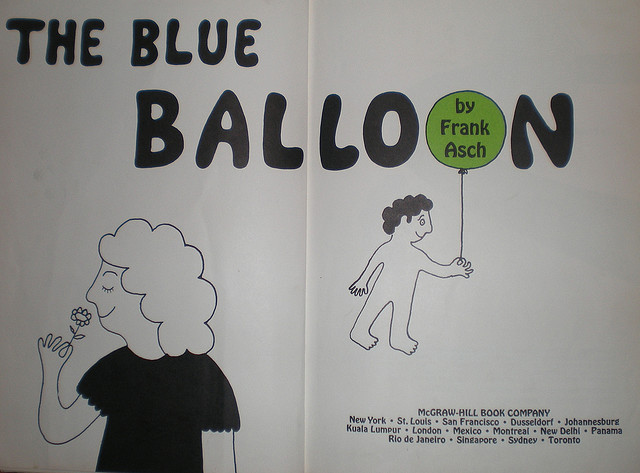 Asch wrote the cryptic Blue Balloon following a trip to India in which he encountered “many wise men and guru types.” After a lengthy talk with spiritual teacher Ram Dass, the story came to Asch, who was exploring his spiritual side and attempting to write children’s books that reflected this journey. “At that time, I wanted to express the deepest most profound truths in my books, rather than just make kids sleepy at bedtime. Not that these are contradictory objectives… I often thought about the bedtime story as the most auspicious time to suggest something of value to a little kid (and, therefore, the adult he will become). Just as they drift off to sleep, say ‘life is rich,’ and that message goes in deeper into their unconscious than at any other time.” 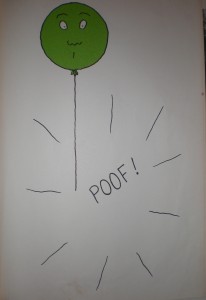 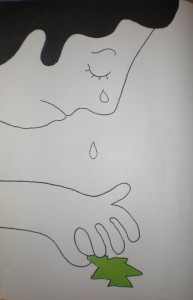 The Blue Balloon, which features a balloon that is very much green (“this gave the production staff at McGraw-Hill and the printer fits,” the book’s editor told us), also features a little boy facing a form of death: The balloon pops. Taking a moment to grieve over his loss, he then attempts to glue it, which doesn’t seem to make the personified balloon terrifically happy. The boy flies over a monster, landing smack dab onto the monster’s face. The monster, who turns out to be a softie at heart, gives him balloon food, and the boy commands the balloon to ingest it – by force of a gun. “{The gun’s} so politically incorrect, even I would want to change that if I were doing the book now,” Asch told us, noting that the book likely wouldn’t be published in today’s “money-minded” world of publishing and that he was lucky to get it published even back then. 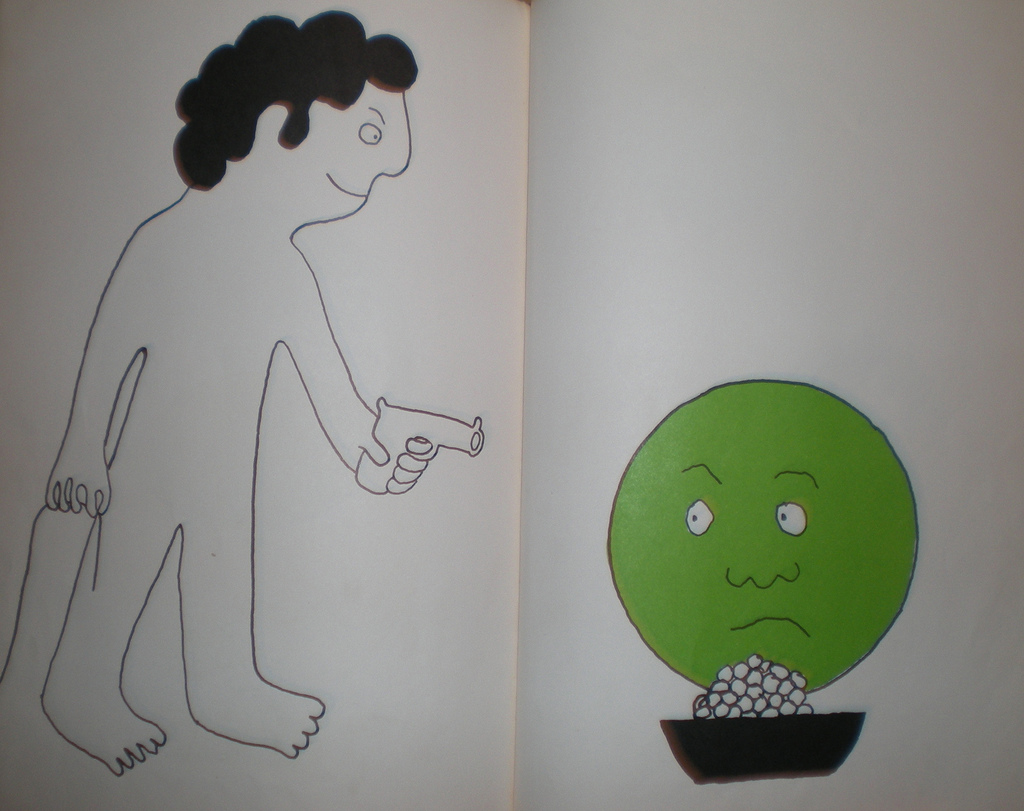 After his meal, the boy quite literally disappears (“POOF!”), just as the balloon once had. He grieves for the lost boy, who grows into a flower right in the spot where his body had once been. Right on, man. 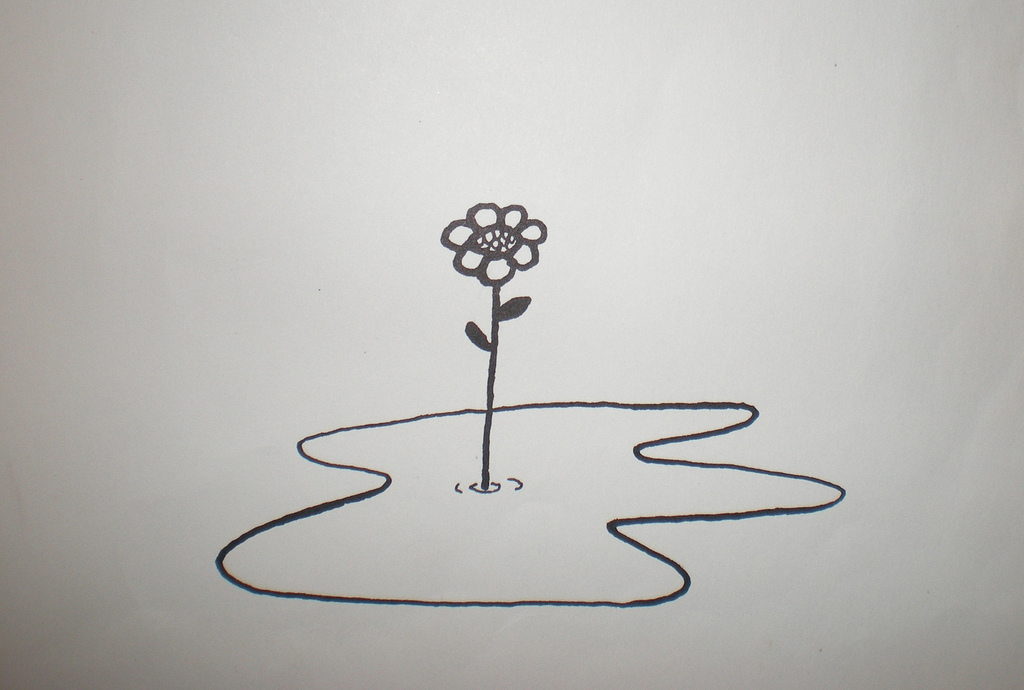 The book’s editor, Leigh Dean, was someone who discovered, mentored, and published first-time authors and artists. “I, too, thought out-of-the-box,” she told us. “The conservative folks at McGraw-Hill were quite skeptical. Would a three-to-six-year-old child ‘get’ it?” On a trip to Houston, Texas, Leigh entertained a large group of preschool- and kindergarten-aged kids. She decided to “test-market” the book “with some running commentary about friendship, loss, the unexpected, betrayal, monsters who surprise us, black mail, resolution. I always saw this book as an inspired opportunity for adults—parents, teachers, older siblings—to have a sharing dialogue with a little one in much the same way that my running commentary brought the kids in Houston to a deeper understanding of emotions and friendship.” 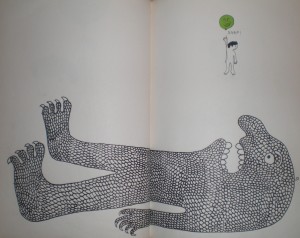 There is an old story about a father and a child, Asch told us. The father is too busy to play with the child and gives him a puzzle to work, a complex puzzle picturing the earth and all its countries. The occupied father is satisfied, figuring it will take the child a long time to complete the task. However, the child returns in no less than five minutes. When the father asks how he completed the puzzle so quickly, the child responds, Look! There was a picture on the back of the puzzle. It was a picture of the human body. I turned all the pieces to that picture and put it together easily. Then I flipped the puzzle over. “That’s how I have come to think about stories,” said Asch. “I focus on the back of the puzzle. Then the reader flips it over when he reads it.”

No doubt readers were—and still are—flipping The Blue Balloon over. And over. And over again. In an attempt to connect the puzzle pieces of one of children’s literature’s most flower-child, free-spirited titles. 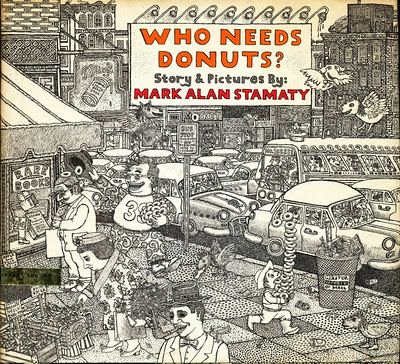 In the other corner, vying for Most Seventies-riffic title, is yet another cult favorite, Mark Alan Stamaty’s 1973 picture book (re-released by Random House in 2003), Who Needs Donuts? To understand the types of reactions it gets from fans, visit this blogger’s post, which includes such choice phrases as “the most complex visual minestrone you’ll ever find” and “Stamaty induced chaos.” That post also includes an interview with Stamaty, who does his best to address how the book became a cult favorite and recalls a reviewer’s apology for scathing words about the book.

The book, jam-packed with detailed cartoon drawings, tells the story of Sam, a young boy who loves donuts and wants way more than his parents can ever offer him. Sam sets out on a quest for donuts and ends up befriending a man who collects the tasty snacks. Eventually, with his donuts, Sam ends up saving the life of an elderly lady who repeatedly asks, “who needs donuts when you’ve got love?” 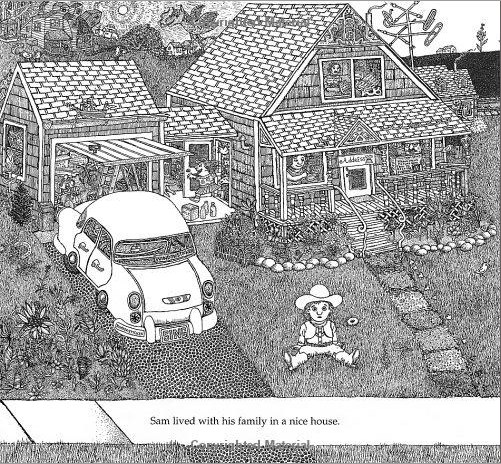 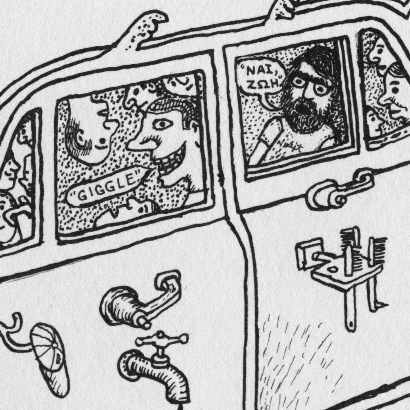 Back in art school in New York City, Stamaty lived in a boarding house on Gramercy Park and frequented, sketchbook in hand, an all-night coffee shop on 3rd Ave and 23rd Street. He’d kick back, people-watch, makes notes, and draw. Here’s what happened next …

One night around 11 p.m., when I came in and sat down, there was a sad, old woman draped over the counter looking like she was asleep. After a while, a well-dressed man in an overcoat came in and asked the waitress for two cups of coffee to go. The waitress asked him if he’d like donuts with the coffees, and he said, no thank you. At that point, the sad old woman lifted up her head, pointed at the plastic light fixture on the ceiling, and said: ‘That’s right! Who needs donuts when you’ve got love!’ I thought that was a great line. I wrote it in my sketch book, and when I got back to my room and the boarding house I wrote it on a larger piece of paper and hung it on my wall. When other residents came in my room, they were often amused by it. Several years later in my apartment on MacDougal Street, I was trying to write a children’s book. I looked around the room, saw that sign and decided I would write a book about that line and that sad old woman… A lot of what the book was about for me was the energy and intensity of New York City, which I loved so much. And the visual impact it had on me coming from the New Jersey suburbs. I loved the crazy energy of it all, a lot of which is expressed in…the endless amount of visual stimuli so infinitely abundant in the big city. 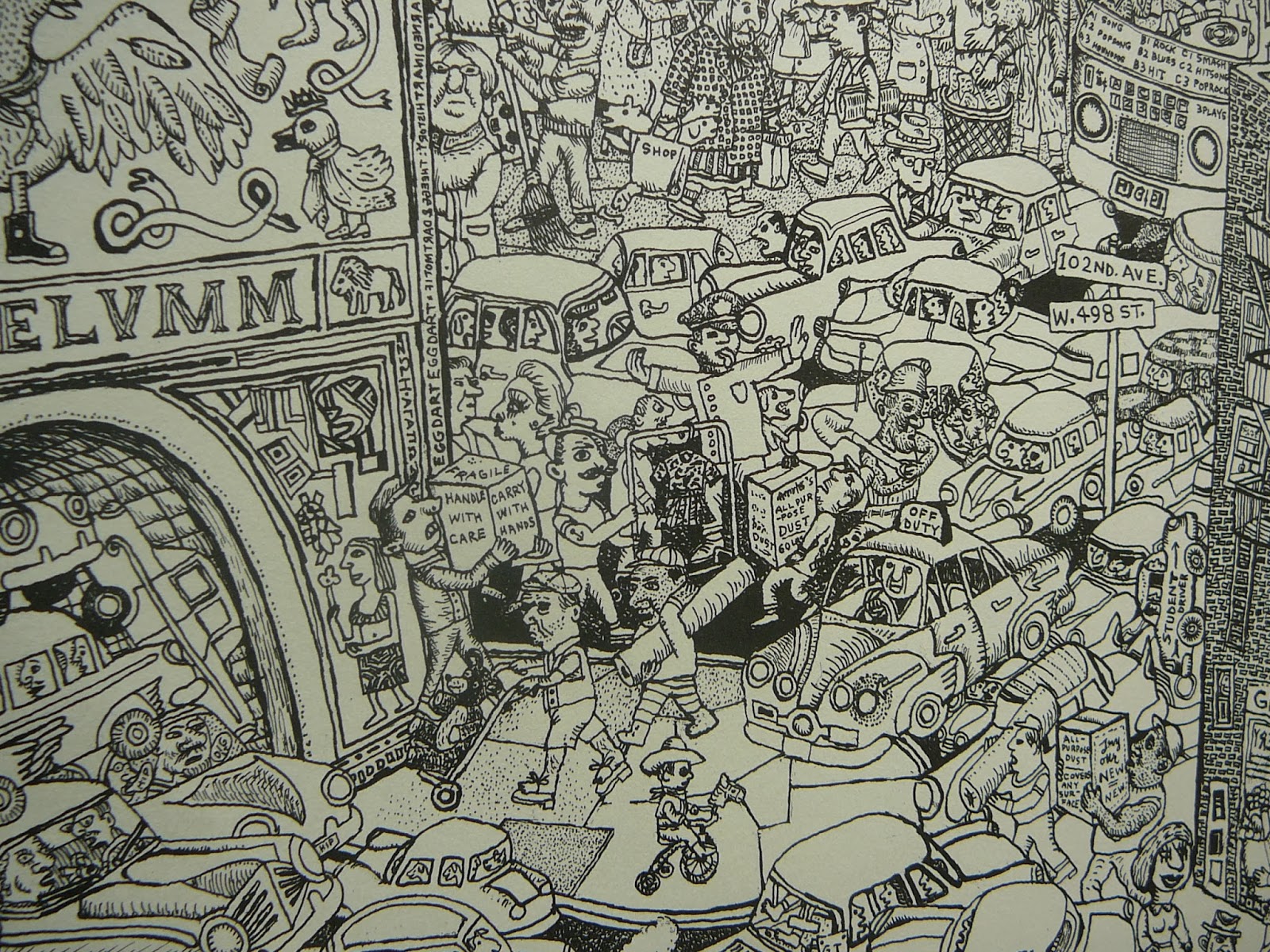 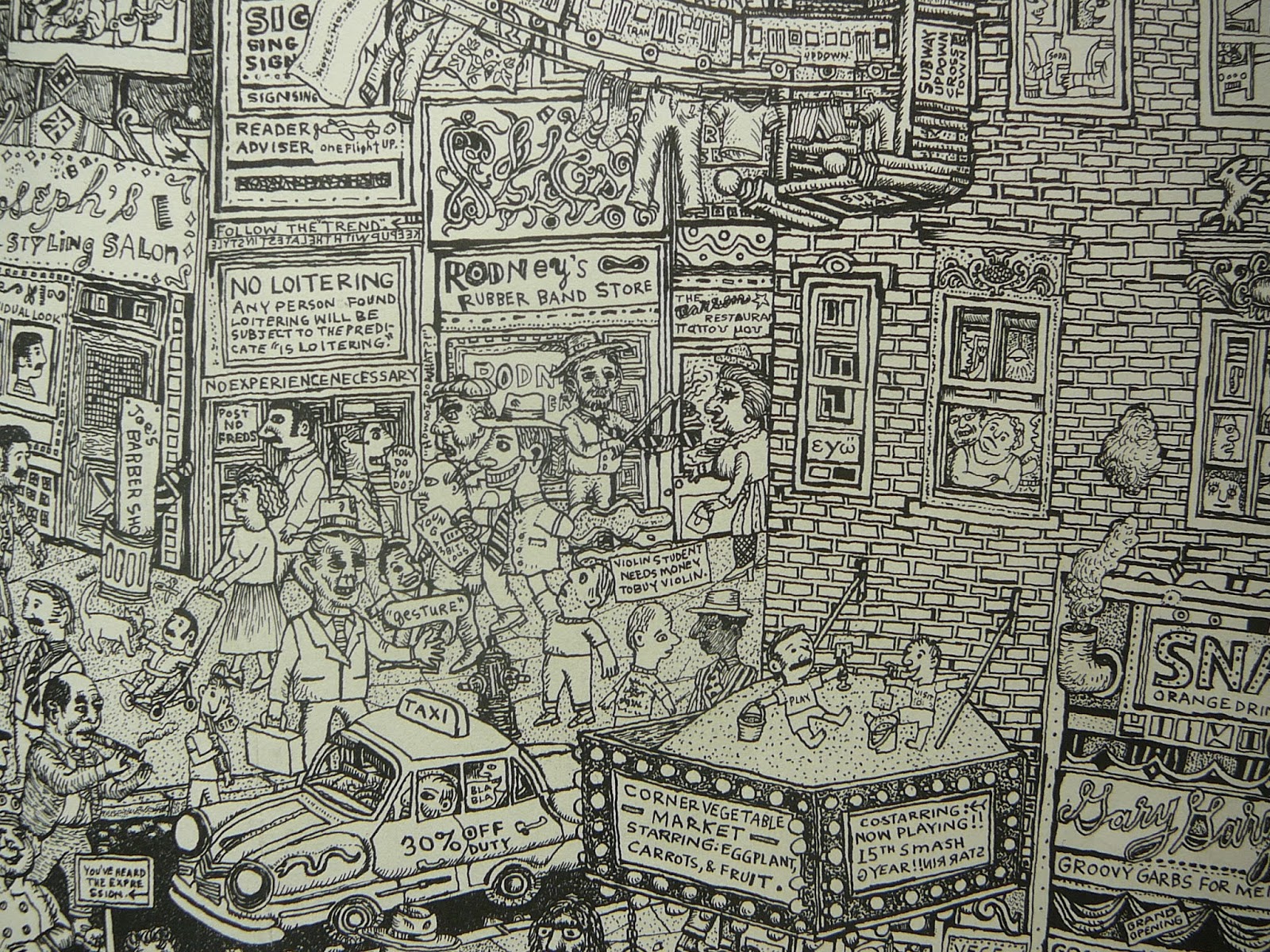 As for this millennium, the art for Steve Light’s latest picture book, Have You Seen My Dragon?—as blogger Carter Higgins points out here—has made more than one person think of Stamaty’s book.

Your turn! What are some of your favorite picture books of the cryptic variety?

All images here are reproduced with permission of Frank Asch and Mark Alan Stamaty.