In Lois Lowry’s 2011 children’s novel, Bless This Mouse, illustrated by Erich Rohmann, a colony of church mice struggle to avoid an extermination. When mouse matriarch Hildegaarde calls for brave volunteers towards the book’s close, Lowry writes,

‘Must they all be male?’ Roderick asked. ‘There’s that very strong pair of females: Trina and Jean. They’re always doing pushups.’

‘They’d be perfect. Male, female, doesn’t matter. Trina and Jean will be fine. Strong! And brave! That’s what we want.’ 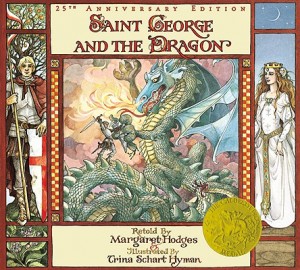 At the same time we were conducting research for Wild Things!, we read this and wondered: Could the Trina in this story, this very minor character, be Lowry’s quiet tribute to Caldecott medalist Trina Schart Hyman, who died in 2004? Hyman, you see, was an act of mischief all her own (and we say that reverently and affectionately), and there’s more than one story in our book that involves her — and her very playful wit. (Pictured left is the picture book for which she won the 1985 Caldecott Medal—though she also received Caldecott Honors three separate times.) We also knew that Trina and Lois had been friends, and we also learned from our research that, indeed, Trina was strong and brave.

We asked Lowry. And, sure enough, that’s the one and only (and fearless) Trina Schart Hyman to which Lowry refers in that portion of the novel. “Ah, busted!” Lowry told us. “Yes, that is Trina and her partner Jean in the book. Trina was a very close friend of mine and I thought she’d get a kick out of it, if she knew.”

Here’s what Lowry, two-time winner of the Newbery Medal, told us about her friendship with Trina. This “wanted” poster remains one of our favorite stories from the original manuscript that didn’t make it to publication, but we secured Lois’ permission to share it here, in honor of Trina:

Trina and I were very close friends. We both grew up in Pennsylvania (though never met until the 1980s) and could almost finish each other’s sentences at times. Once she had an abscessed tooth (tooth #14; did you know that teeth are numbered?), and I had an abscessed tooth (#14) at the same time. Here’s a poem I sent her on her birthday that year [April 2001]:

Bang the drums and tambourina!

Blow the flutes and ocarina!

Bring them in by limousina!

Let’s feast! We need an aubergina!

And fruit as well! Some tangerina!

Dress her in mink and black sateena—

Nothing is too good for Trina!

But one year I had been in Ohio, speaking in a university chapel, had stumbled, fallen, and hit my head on the side of a church pew. Ignominious accident — and I ended up with a black eye.  Trina, same time, had been on the coast of Maine, had stumbled on some rocks — same injury. Hence the ‘poster’ [below]. (The reference to Hawaii is because we—and her partner, Jean—had recently been there together.)I do miss Trina. 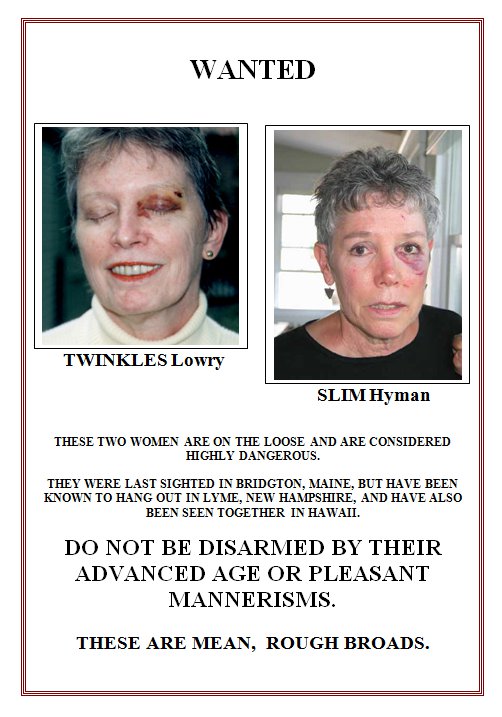 3 Responses to "Twinkles Lowry and Slim Hyman: The Untold Story"