So, it’s happening. The book we’ve been working on for five years, if you start counting back to when you initially had the idea, is almost here. I’m looking forward to sharing this Web space with you for a while, where (as explained on this page of the site) we will repurpose some stories that didn’t quite make it into our book. The idea anyway is to share a story (or two) a day, up until the book’s publication day, August 5, 2014. We might have some fun with videos, too.

I found this image the other day, and it reminded me how much the book has changed: 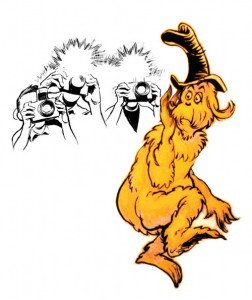 The very talented Adam Rex created that for a 7-Imp post I did back in 2009, a post about the book deal and the fact that Candlewick would be publishing the book. When we first started, our guiding theme was “Kidlitconfidential,” remember? We’d be writing a book, aimed at the average person on the street, which debunked the cute, fluffy notion of children’s books by telling wild ‘n’ wacky stories about book creators and a bit about the books themselves. (Remember how we wanted it to be chock full o’ images, almost like a coffee table book? So innocent were we in the ways of the procurement of images and all its exorbitant costs!) The book is still Kidlitconfidential-esque in some ways, I suppose, but our editor, Liz Bicknell, also steered us in another direction. She encouraged us to include way more discussion and analysis and context and dig at some deeper issues. We still aimed for a conversational, relaxed tone (dry — we really wanted to avoid dry), but we knew we had to address some meaty issues, too.

And then our audience changed, too — from Average Person on the Street to, say, new parent or someone who’s just decided s/he wants to be a librarian or editor or otherwise work in the field of children’s lit.

So, can you believe publication day is nigh? Are you pleased with the book’s evolution and end product? And don’t you wish Peter were here for this? 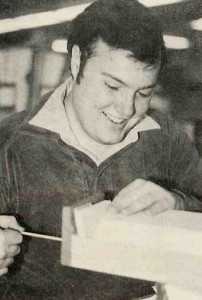 Betsy: I’m still gaga over that Adam Rex image you dug up (and I am of the opinion that he is the most famous American children’s book character without a name). I note that you didn’t mention the page count of our original manuscript.  If memory serves we were topping out at 600 or 700 pages there for a while. And it was Liz who reeled us back in and honed us into the tight, svelte little number we are today. To say nothing of the analysis and context she inspired.

But to get to your questions: (1) Nope. Can’t believe it. We’ve been working years on this puppy. I think I birthed two children during its process. So I seriously consider this to be birth #3. (3) I wish Peter (our co-writer) were here completely. Without him this book wouldn’t even exist. I suspect that all the best stories in it are probably his. And (2) Yes indeed I’m very pleased with the book’s evolution, end product, the whole kerschmozzle. To mention how our focus changed over time from a kind of nudge, nudge, wink, wink tome to a book that still offers up the goods, but does it with a greater purpose in mind.

I know that when I hold it in my hand I do feel the occasional stab of regret over some of the stories that were ultimately cut. Sometimes I’ll be describing the book to someone and bring up a tale that no longer appears within the pages. Do you ever find yourself doing that?

Jules: Yes, it was sad to see, for one thing, the story of Marguerite Henry’s Misty go, but we can always include her story here at our site. That should be fun. In fact, let’s do that tomorrow.

As for Peter, the book is the most like his blog than any of our three, I think. And he was so excited about its publication that the official book release day will definitely be bittersweet.

I think one thing that was in-a-good-way challenging that (I hope to readers) worked out well in the end was that there were three of us writing. We all have different writing styles at our blogs, and we’re three very different people in many respects. But merging our three voices wasn’t as difficult as I thought it’d be. We could always pretend that behind the scenes there was crying and screaming and backstabbing (it’d certainly make for a dramatic post at this blog!), but nope … we all got along swimmingly. And with the writing, we met somewhere in the middle with regards to the tone of the book (for one thing), as we had to do, and it almost feels like the book is this fourth voice, one that resulted from combining our three. Does that even make any sense?

Betsy: Now you have me imagining a reality show-type confessional post of all the screaming and backstabbing we could have done on the project. We should fake one! Problem is, it would have to be entirely fictional since you two were, without a doubt, the easiest co-writers of all time. If we were to ascribe character types, I’d make you the Scarecrow (the brains behind the operation), Peter the Tin Woodsman (the heart, no doubt), and me the big fu 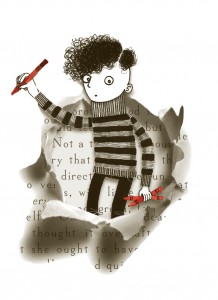 rry guy afraid of how this was all going to go down. Sounds about right, yes?

It is odd how easily our collective voices merged. There are times when I honestly cannot remember who wrote one section or another.  As you say, the book acquired a kind of fourth voice. Let’s call it Wild Boy, a.k.a. the kid on the cover of our book.

Are you sad to see it done at long last?  I’m filled with this extreme relief (this is the first book I’ve done that felt so much like a birth — LONG hours of last-minute labor included), but at the same time it was this nice constant in my life for so long. It seems strange to think it’s almost over.

Jules: Yes, it’s strange, but it’s definitely time. This is my first book (though I know it’s not yours), and I find it very bizarre and slightly frightening, yet also wonderful, to have it heading out into the world to readers. I hope they enjoy it — or at the very least find an element or two (or three) they enjoy about it.

I raise my coffee mug to you way down here in Tennessee!

Betsy: And I my martini glass (as is required per all Manhattanites) to you here in New York City!

Hope you enjoy it, folks!

The Sam I Am illustration was created in 2009 by Adam Rex and is used with his permission.

Photo of Peter Sieruta used with permission of the Sieruta family.

Our Wild Boy is from WILD THINGS!. Illustrations copyright © 2014 by David Roberts. Reproduced by permission of the publisher, Candlewick Press, Somerville, MA.